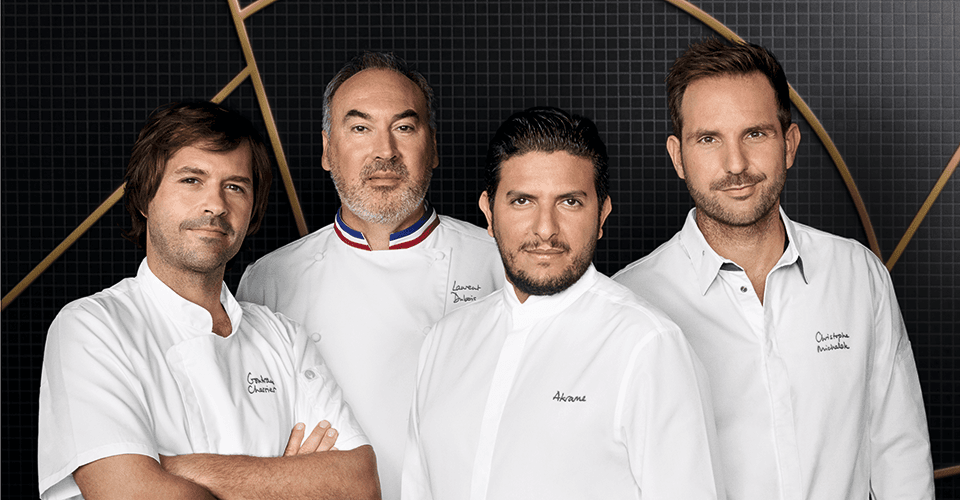 There are some simple things which the French do very, very well. One is macarons – allegedly very tricky to make (more on this later). Another is style – Paris really trumps London in its wonderful character and ambience, where ordinary streets are elevated by their chic shopfronts and quirky interiors.

I was in Paris to attend the SIAL Food Show. This is a giant behemoth of a show with over 7,200 exhibitors from 119 countries and 310,000 visitors, of which 73% came from outside of France this year. The 2018 show had a vibrant and upbeat atmosphere (as compared with 2016, which was a little subdued with strict security arrangements in place following the Paris bomb attacks). Security is still tight but less intrusive.

This year’s show saw a number of innovations including the Alter’Native Food Forum, dedicated to sharing trends and knowledge on new healthier foods, and also Future Lab, which focused on food forecasting and what we might be eating in 2030. An immersive walk-through tunnel explored four major food trends as follows:
• Alternative proteins
• Personalisation of food and health products
• Robots and artificial intelligence: the chef of the future
• Transparency and traceability: knowing where our food comes from

My prize for most eye-catching stand at SIAL has go to Camelicious from Dubai which sported a very life like mascot!

My French sojourn wasn’t confined to the trade show and, armed with a few tips from friends and colleagues, I spent a few very pleasant hours checking out Paris gastronomy. My first port of call was the new Printemps du Gout food concept within Printemps flagship department store on Bvd Haussmann. A former colleague based in Paris had recommended a visit, and it didn’t disappoint.

Open since 10th January 2018, it consists of two floors of what could be best described as curated French delicacies. Located at the top of the men’s store, one floor features Fine Foods – the best of artisanal French produce – with iconic products on offer including the Maison du Chocolat, in addition to Maison Balme truffles, Byzance caviar and smoked salmon, Dubernet foie gras and more.

The second floor – called Market Place – brings together other specialities, tastings, workshops and opportunities to meet producers, artisans, winemakers and chefs from France. These include France’s most creative chefs and artisan bakers including Akrame Benallal, Gontran Cherrier, Laurent Dubois and Christophe Michalak (pictured below).

The décor is both modern and sumptuous and, with each artisan having their own dedicated tasting area, feels like a luxurious food market.

Paris is of course chock a block with fabulous “eat with your eyes” shops, such as Aux Deux Caneles near Chatelet (a canelé is a cork shaped pastry from Bordeaux with a caramelized crust and soft middle). 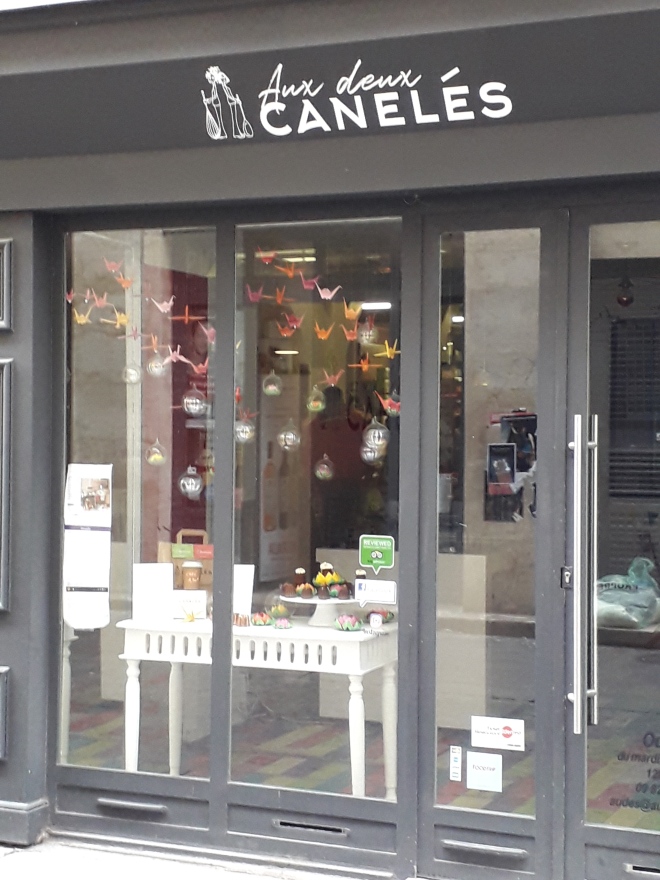 Maxim Chocolates flagship store in the Louvre is an exercise in downright decadence.

As a fan of bagels, I also checked out the chain Bagelstein (outlets nationwide in France and Belgium) which specialises in all things bagel, their mini bagel boxes are a treat. 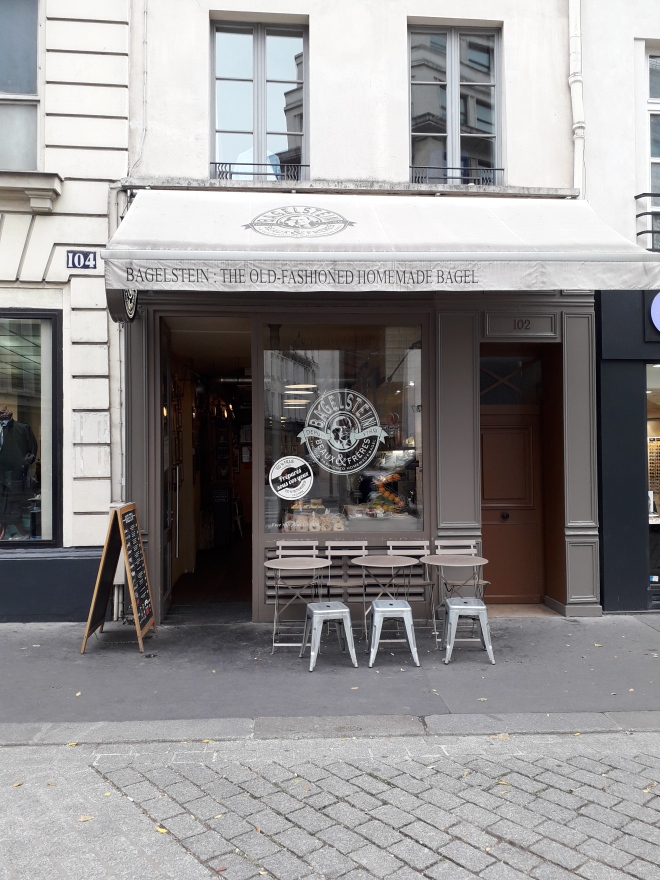 Even relatively ordinary neighbourhood boulangeries such as Maison Marnay in Les Halles have fabulous ranges and very affordable prices. 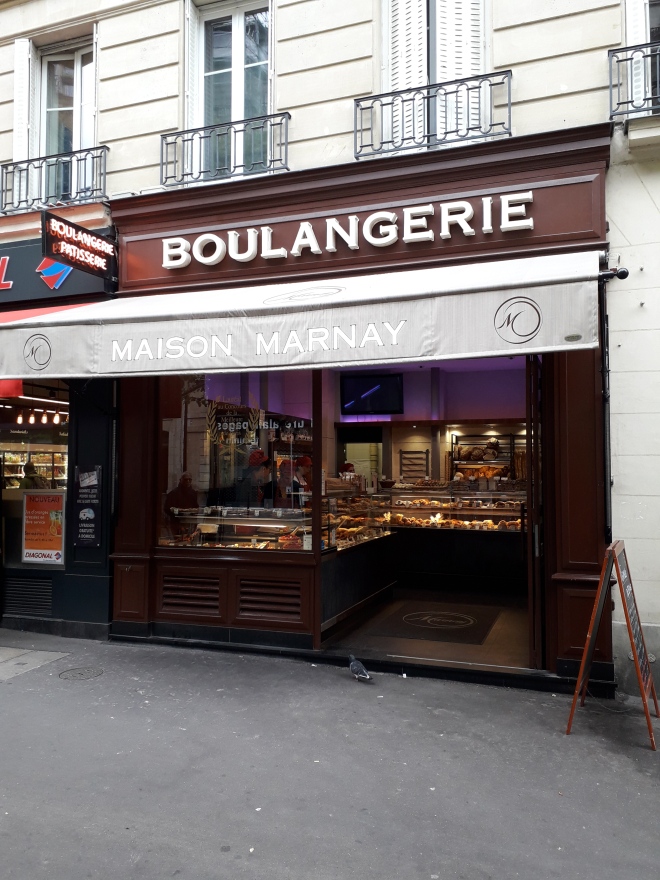 La Guinguette d’Angele serves gourmet takeaway food from one of the tiniest shop fronts I have ever seen.

The Marlette “bio” café is a particularly interesting concept store, located in the The BHV Marais department store, which is located close to Notre Dame. Dubbed “the Parisian’s favourite”, this 6th storey department store was extensively renovated in 2014 and now rivals its more well known competitors quite comfortably. Marlette is a French organic baking kit supplier and this café sells both their organic baking kits and the finished product in a location which has stunning views of Paris. The chocolate fondant – so rich I couldn’t finish it – is a particular speciality. 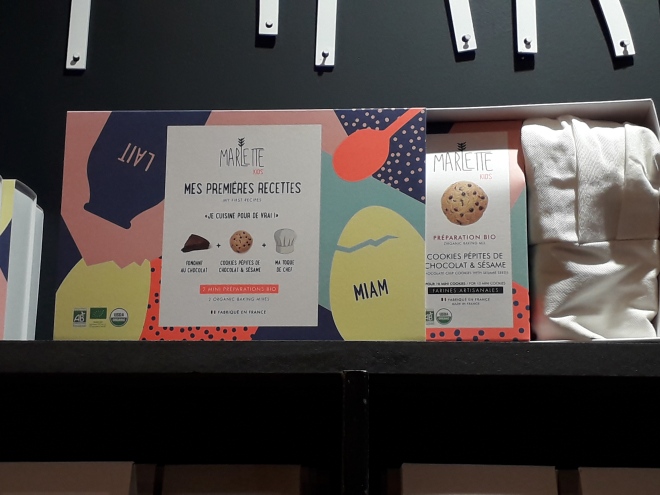 On the macaron front, by the way, the most intriguing offering I discovered (and there are quite a few) was Monsieur Benjamin in Les Halles, an art pastry shop which treats pastries as artistic endeavors. This is quite simply macaron heaven!

For a few more suggestions, including the legendary Laduree and Pierre Herme, check out this link, Best Macarons in Paris.

Paris – best enjoyed unhurried and with a large pastry.