At this time of the year, national festive traditions are laid out in their full glory. In Austria, Germany and much of continental Europe, atmospheric and authentic Christmas markets in the great European cities of Vienna, Prague, Nuremberg and … Birmingham (more on this later) have become popular tourist attractions in their own right.

In Sweden they celebrate Santa Lucia Day on December 13th every year, which features an enchanting procession. I recall seeing this on a cold winter’s day in London’s Swedish church back in the day and it is utterly spine tingling. It’s a celebration of light at the time of year when the world is darker and it also marks the official start of the Christmas season in this part of the world.

In Spain they have El Gordo (the National Lottery), the second longest continuously running lottery in the world and also the largest in terms of total prize payout. Due to the complicated ticketing structure which allows the tickets to be sold in fractions, a huge proportion of the Spanish population participates in El Gordo and the country is gripped with lottery fever in the run up to the draw on December 22nd. El Gordo has also generated some of Europe’s best advertising campaigns at Christmas time, my personal favourite is the 2015 edition.

All told, these feel like proper grown up traditions that one can hang a hat on.

There is one great seasonal tradition here in Ireland however which holds its head high, stubbornly defies logic and ignores the obesity debate. Let the selection box step forward. 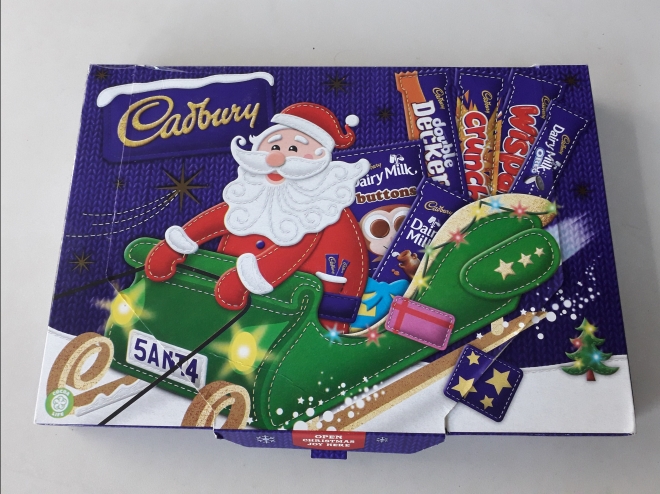 I used to find the selection box tradition a bit bizarre. What was festive about a bunch of chocolate bars in a cardboard box, I wondered? Sure as a child I remember it being a big treat, but now, in our land of (far too) plenty?

But now with mature reflection I have come to fully respect the intrinsic importance of the selection box as a cultural marker. Specifically, they:

I have heard it said that a selection box is a good present for an adult who doesn’t deserve a present (the anti-Santa?). Unsurprisingly many adults treat themselves to a box. Remember the frenzy last December during 98FM’s Selection Box Giveaway? The mystery location – Finglas – was revealed shortly beforehand leading to traffic chaos amidst reports of drivers of 40 foot trucks beating a path to Oscar Traynor Road, grimly determined to have their box and eat it.

Although the history of selection boxes is relatively unknown, they were common in late 19th and early 20th century Britain. Chocolatiers such as Rowntree’s and Cadbury pioneered the early selection boxes which were saved for by way of a Christmas club over several months, to be collected around Christmas time. Choice and variation of contents were the buyer’s choice, and often the value of the selection box would exceed a week’s wages.

Generally selection boxes start to appear in our house from late November onwards as end-of-year presents from the childrens’ various clubs, associations etc. This year for convenience I placed a dedicated box near the front door to gather them all on arrival (so far two and counting) and briefly considered labelling each of them to prevent confusion.

Selection boxes have attempted to be more environmentally friendly in the past few years, with some downsized plastic covered versions now available. These haven’t cut the mustard with my kids though (too meagre in content). Tinkering with classic formats can be a dangerous game, as Cadburys discovered last year when they replaced the Fudge bar with a Dairy Milk Oreo one, resulting in outrage from selection box fans who accused the manufacturer of Chocolate Tyranny.

As for the Christmas markets I mentioned earlier, here is a good summary of some of Europe’s best known. It may come as a surprise to learn that Birmingham (a mere 55 minute flight from Dublin) hosts the largest German Christmas Market outside of Germany. Worth checking out.

And Ireland has plenty to offer as well, a comprehensive guide to markets around the country this year can be found here.